RssInstagramTumblrPinterestYouTubeGoogle+TwitterFacebook
I’ve been inspired by, and have advocated, Jacque Fresco’s vision, perspectives, and work on The Venus Project since my teenage years. Approximately 15 years later, I finally had the opportunity to interview Mr. Fresco, thanks to one of his most devoted supporters, Jennifer Huse, and co-founder of TVP, Roxanne Meadows – who is also an accomplished technical and architectural illustrator and documentary filmmaker.

The following delves into Jacque’s early life, what motivated him to pursue his lifelong journey, the prospects of The Venus Project, the state of our world, and his perspectives regarding technology and the future. 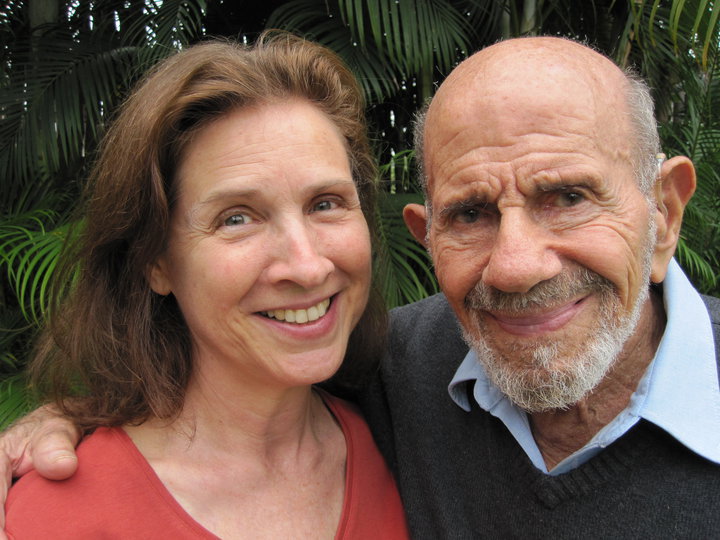 Who or what inspired you to pursue the path you’ve dedicated your whole life to? What has been the driving force, or intention, behind your motivation?

A. It was living through the 1929 great depression that helped shape my social conscious. During this time I realized the earth was still the same place, manufacturing plants were still in tack, and resources were still there but people didn’t have the money to buy the products. I felt the rules of the game we play by were obsolete and insufficient. Misery suffering and war provided the incentive for my life’s work.

I was also motivated by the seeming incompliance of governments, the academic world and the lack of solutions offered by scientist. I realized instead of working with individuals a more effective method would be to redesign the culture. This became a life long quest to finding solutions to the many problems that we have today.

Can you briefly explain how the concept of ‘ownership’ would work in the future proposed by the Venus Project? Based on some feedback I’ve come across, there is a concern that people will just take whatever they want from others.

A. Ownership and possession are methods fostered within the monetary system for very specific reasons. It promotes their use as a tactic to sell as many products to each individual as possible or go into debt to acquire them to maintain and perpetuate the monetary system.

There is always the need to acquire more to keep up with those of higher wealth to maintain greater status. Those who own more and acquire greater opulence are more admired and reinforced in today’s system. Essentially, the more possessions one achieves, the more value they have.

Others become indebted through jobs or their time & energy to those who have the wealth just so they can acquire money to get the possessions they need.

A Resource Based Economy does not value people by their ability to acquire, possess and accumulate material objects. In fact, it is not part of the equation at all. Everyone has access to the necessities of life, which include all of the goods and services that a highly productive and technologically advanced society can achieve.

When people have access to their needs there is no reason to steal or take things from others when anyone can acquire whatever they want from the access centers. You can think of this as being similar to the public library of today. Objects can be returned if they are not constantly needed so this helps conserve resources.

Things are not made to wear out and break down to keep an artificial market going as is the case today. You would not have to work for years to acquire the goods you need to live; there is no need to insure them, to maintain them, have bars or safety devices installed at your home to protect them, or have to replace them. Ownership is really burdensome and a tremendous waste of our finite resources.

To summarize, it is far more humane and life supporting to use a system based on universal access, for it dramatically lowers waste and redundancy, eliminates envy, status hierarchies and all of the ramifications of a lack of self-worth that goes along with that, while increasing efficiency and resource management to enable everyone on the planet to have access to the things they need in order to have a dramatically higher quality of life.

The topic of Universal Basic Income, 3D Printing, and Automation are trending topics that are shifting our perspectives of work and living. These have been themes in the Venus Project for years, even though a Resource Based Economy would best support an advanced civilization. What else should we be considering (removing and/or improving) in order to mature and continue progressing as a civilization?

A. The changes that may occur are not necessarily for the betterment of society unless a large number of people are familiar with the physical nature of the earth and the interrelationship of ourselves with it. In other words, our decisions must be in accordance with natural law and with the carrying capacity of the earth’s resources. A given amount of land can only support so many people. If the population exceeds the carrying capacity, there will be territorial disputes, crime, wars, homelessness, poverty, and countless other hardships.

Building the architectures you’ve designed seems to be the easiest aspect of bringing the Venus Project to life, but how do we best adopt its social, political, and cultural paradigms on a global level beyond our differences? Looking at the U.S. and Brexit, it seems that ‘nationalism’ would be one of the major challenges for the Venus Project.

A. I do not believe it can be brought about by the free exchange of ideas alone. It takes more than words and verbal exchange to bring about an innovative society. It will require a new set of values more appropriate to our needs. The solutions to our problems will not come about through the application of reason or logic. We do not live in a reasonable or logical world. There is no historical record of any society that deliberately and consciously modified their culture to fit changing times. The real factors responsible for social change resulted from biosocial pressures inherent in all social systems. It is brought about by natural or economic occurrences that immediately threaten large numbers of people. 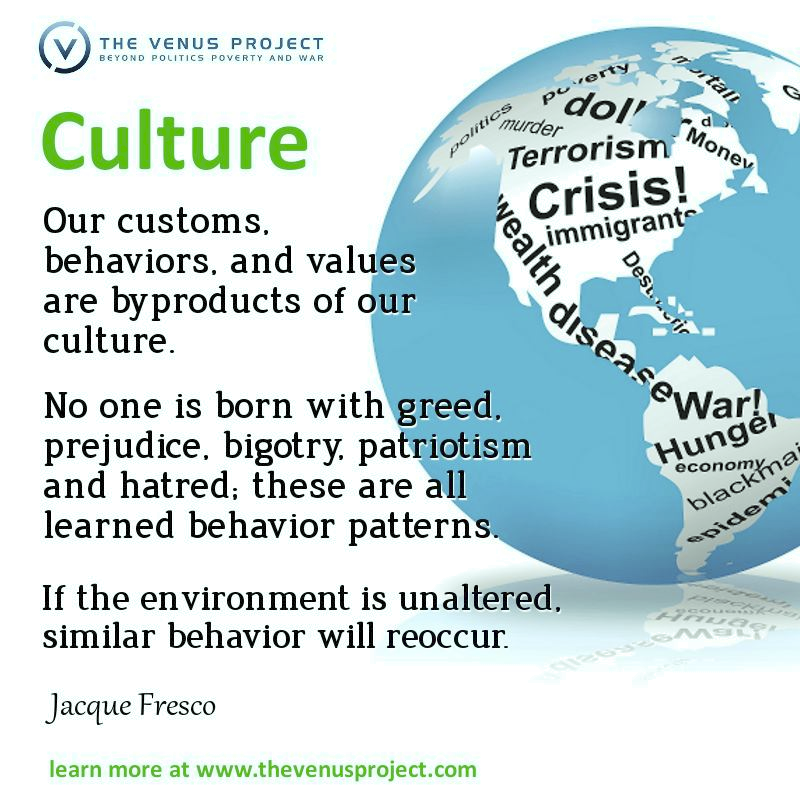 Some of these conditions responsible for social change include limited resources, war, overpopulation, epidemics, natural disasters, economic recession, downsizing on a mass scale, technological displacement of people by machines, and the failure of their appointed leaders to overcome these problems.

Change can come from disasters or from major technological advances. The direction change takes is not always for the better or for the improvement of the human condition. Change is risky. Deprivation or scarcity that is artificial or real drives the economy. Power-seeking leaders command weapons powerful enough to annihilate entire populations and render our planet uninhabitable. Humankind has great potential for creativity, innovation and cooperation, yet every time that we exercise destructive power, we take a thousand steps backward for every few forward.

The challenge that all cultures now face in this technological age, some more than others, is to provide a smooth transition towards the introduction of a new way of thinking about ourselves, the environment and the management of human affairs. It is now mandatory that all nations engage in a joint venture, planning on a global scale for new alternatives with a relevant orientation toward social arrangements. This is the only option if we are to avoid the unavoidable decline of the so-called civilized world. If humankind is to come together toward a mutual prosperity, universal access to resources is essential where all Earth’s resources become the common heritage of all the world’s people.

Our problems today are enormous and global in their scope and impact. They cannot be solved by any one nation. The concept of common good is global in nature, but local in implementation. We must start with what we have in common; overcome our regional differences. All social systems, regardless of political philosophy, religious beliefs, or social customs, ultimately depend upon natural resources like clean air and water, arable land, and the technology and personnel to maintain a high standard of living. This can be accomplished through the intelligent and humane application of science and technology using a global systems approach. When money and self interests are outgrown, interaction between nations won’t be based on self interest, but on mutual interest. This approach will help eliminate artificial boundaries that separate people.

Do you think the Transhumanism movement, as supported by Zoltan Istvan, will pave way and become a bridge for the adaptation of the Venus Project? If not, what do you think is the best way for the world to transition to the future the Venus Project envisions?

A. We are grateful to have met Zoltan and appreciate what he has done to introduce the work of The Venus Project to others. We are presenting an alternative global society. We have always been trying to inform people, groups and communities about this alternative direction. At this stage, we are not in a position of power in order to make a transition. We would like to initiate as much of it as we can, if we get that opportunity. We are always working toward this. But it depends on what others do as well. If people identify with the aims and proposals of The Venus Project we invite them to learn as much as they can about it and join with us in translating these proposals to a working reality. It will take the help of many.

Please check out our website www.thevenusproject.com to learn more. We also give Tour/Seminars every Saturday at our research center in Venus, Florida, and sign up for our newsletter to keep up with what we are doing to help achieve this.

Thank you, Mr. Fresco! The Venus Project has come a long way, but there’s still a lot of work to be done to actualize this scientific, technological, and progressive vision. A vision that isn’t so much a utopia as it is an imperative paradigm shift for the future of humanity – on Earth and beyond.