The Transhuman Visions Conference will take place in San Francisco Feb 1st 2014. I asked my friend and event organizer Hank Pellisseir of BrighterBrains.org to tell me about this event and why Serious Wonder fans should attend. Get your ticket HERE!

GS: Tell me about the Transhuman Visions Conference. What is it all about?

Additionally, there will be tables offering “Transhumanist Lifestyle” products – nootropics, anti-aging pharmaceuticals, a DVD on The Singularity, books, and several futuristic gizmos by startups that haven’t been fully explained to me. Biohackers will also enable you to get “surgically upgraded” right there – implanting RFID chips, trying on transcranial stimulation helmets, etc. There’s more information HERE

GS: Who should attend?

HP: All Transhumanists should attend, of course. This is a rare event; an opportunity to hear from a huge variety of transhumanist voices centralized in one place for 12 hours. 280 transhumanists (that’s the maximum capacity of the auditorium) – gathered in one beautiful location for 12 consecutive hours? It will be memorable, transcendent, historical, unforgettable. Something attendees can look back on and say “I Was There” and show off their conference t-shirt with pride. I have sold 109 tickets so far – many people are traveling thousands of miles – they are arriving from Washington state, from New York, from the Southwest, and a trio from Maryland.

IMO – Transhumanism is way too much an “online hobby.” Maybe people define themselves as transhumanists simply because they like to bicker about transhumanist topics on Facebook. That’s a very shallow commitment. I agree with Maria Konovalenko, the Russian radical life extension activist, who wrote a great essay HERE.  She says, “Forums… are useless. Conversations among ourselves have given us exactly nothing… [transhumanists] should meet together often, so that new projects can originate from discussions.”

[easyazon-image align=”left” asin=”1118334310″ locale=”us” height=”160″ src=”http://ecx.images-amazon.com/images/I/41XPWt-Jr0L._SL160_.jpg” width=”110″]If transhumanists want to be taken seriously by outsiders, by media pundits, cultural observers and the general public, they need to gather their actual flesh in 3D locations. IMO – which is biased of course because I’m emotionally and financially involved – this conference will separate serious transhumanists from passive posers. There will be San Francisco Bay Area so-called “transhumanists” who will not attend because they’ll say… it’s too expensive, or on an inconvenient day, or they don’t like crowds, blah-blah-blah-blah-blah-blah. The reality is.. those lackadaisical phony transhumanists have a very weak commitment to transhumanism – their involvement will never get past Facebook bickering. They are largely useless and distracting to actually advancing transhumanist ideals.

I am jealous of places like Russia and Israel – nations where there have been public demonstrations by transhumanists. Marches for Radical Life Extension have occurred in Tel Aviv and Moscow.. but never in the USA. Why not? It is time to make that happen. This conference is a first step – let’s see if we can get transhumanists to crawl out from behind their laptops and meet each other face-to-face. If we can do that – step 1 – maybe greater things can happen afterwards. What if there was a March for Immortality Research? Would transhumanists show up, in large numbers? There’s a better chance of that happening if we accomplish this intermediate step; meeting in large numbers at a conference, saying hello to each other, introducing ourselves, shaking hands, etc. San Francisco and Silicon Valley seem inarguably the hotspot for transhumanism in the USA; if it is going to happen, it can happen here.

The rise of New Atheism in the USA provides a role model. New Atheism started out on the internet, of course, and then it became more public. I was involved in that – I produced the world’s first Atheist Film Festival in 2009 and a 2010 Atheist Calendar for Athiests United. Today New Atheism in the USA is very public and out-and-proud; there are billboards, plays, bus slogans, law suits, contingents in parades, public art. Transhumanism needs to do all that, but we’re still in the larval stage, we’re as in-the-closet as New Atheists were about 7 years ago.

Additionally, the TRANSHUMAN VISIONS conference is an ideal event for “newbies” – people who are curious about transhumanism and want to learn more. It will be a great place and day to obtain a comprehensive introduction. 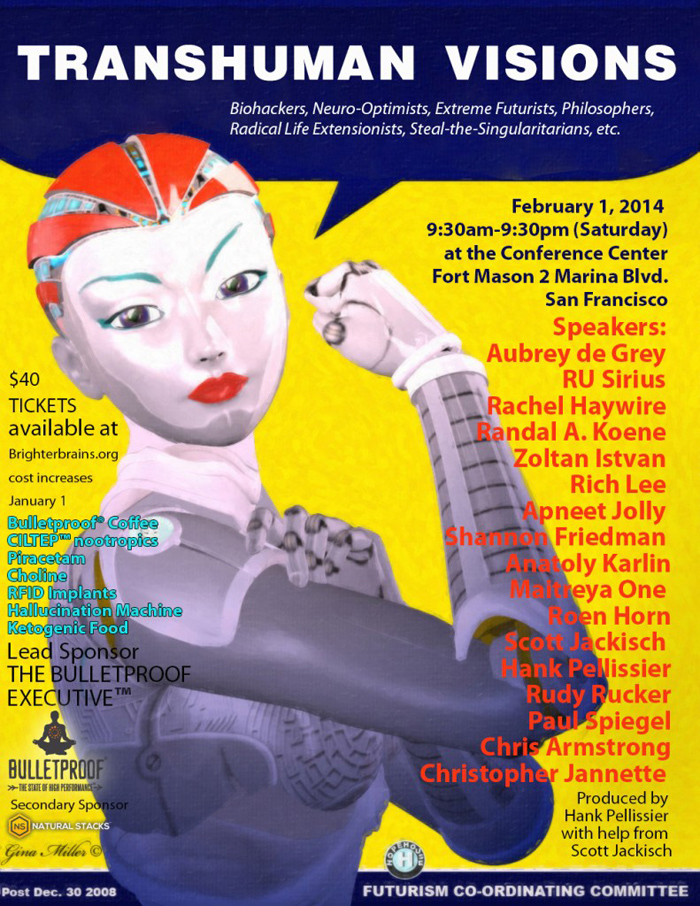 GS: What is Ketogenic food and why is it important?

HP: Sorry to be mysterious – I only learned two months ago what that term meant after I read “Grain Brain” by Dr. Perlmutter. Ketogenic implies a high-fat, very low carbohydrate diet. It is generally used by Paleo, Atkins, and the Bulletproof Executive diet plans. I am on a “ketogenic diet” now and I feel great. An excellent scientific explanation of how it works is provided in the article “Ketosis Makes Your Brain Work Better – it’s Why Dave Asprey Puts Butter in his Coffee” Dave Asprey’s company – The Bulletproof Executive – is also Lead Sponsor for TRANSHUMAN VISIONS. I am delighted with that arrangement. Other sponsors are Serious Wonder and Natural Stacks.

Back to your question – why is ketogenic food important? – I believe “transhumanists” should be interested in nutrition because it’s a scientific investigation into what optimizes human mental and physical abilities. Hackers like Dave Asprey – and Apneet Jolly who is in our speaker lineup – have experimented upon themselves extensively to learn what food is the proper fuel. I have made changes in my own diet that were beneficial, due to their research.

When I say the conference will have “ketogenic food” I am referring to high-fat, low-carb items like grass-fed beef, wild-caught salmon, coconut, eggs, olives, nuts. I am looking for a chef to cook up Uruguyuan steaks and hamburger, if anyone reading this wants to volunteer.

GS: What improvements would you like to make to your body if the technology was ready now?

HP: I have never had good eyesight – it would be a pleasure to ditch the glasses that I am always misplacing and groping around for. I have had one hernia and the other side is weak; I’d like that repaired without surgery. I am not a good sleeper; it would be hugely wonderful if I could exist on 4 hours of nightly deep sleep. Other than that, I am healthy, but it would be funner to be faster and stronger and roll back my aging so that I was a permanent 25 years old. That would give me back   my lost hair too, since I am gradually balding.

GS: Would you sacrifice wellbeing for longevity? Would you want to live 700 years in mild discomfort or even severe pain?

HP: No, I would not. I don’t like pain, I am quite the wimp that way. I had a toothache last year for a day and I was like, “Kill Me Now! I Don’t Want to Live Like this!” I can live with mild discomfort – I mean, that’s what life is, precisely, anyway, isn’t it? – but severe pain, I’d rather be dead.

GS: What advice do you have for anyone interested in Transhumanism or extreme longevity?

[easyazon-image align=”left” asin=”1610391136″ locale=”us” height=”160″ src=”http://ecx.images-amazon.com/images/I/51zKtzILagL._SL160_.jpg” width=”100″]HP: I got interested in transhumanism after I read “The Singularity is Near” by Ray Kurzweil – it blew my mind. Next I read “Engines of Creation” by Eric Drexler. That was similarly astounding. Unlike most transhumanists, I haven’t read a lot of science fiction so I wasn’t as familiar with the possibilities in the future.

My advice to transhumanists is to become an activist; to instigate the changes we want so that we can indeed have a “transhuman future.” This takes more work than just bickering on Facebook. Also, I have been producing material on transhumanist websites for 4 years; writing and editing, launching new sites – this is valuable but very limited, IMO. It’s a step up from bickering on Facebook. I believe, like I said before, that if you really want to influence the future, you need to organize activities offline. You need to teach, or lecture, make films, or art, or theater on transhumance themes, or organize others, or promote conferences… So… you are welcome to help me with TRANSHUMAN VISIONS, or organize one in your own area.