Simulated Universe Theory: Do We Already Have Proof? 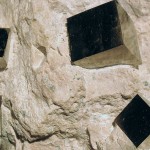 First of all let’s look at the image to the left. It’s an image of Iron Pyrite cubes projecting out of marl or mudstone. Yes, it is real and yes it does occur that way in nature. [easyazon-link asin=”B0081TYDKA” locale=”us”]IRON PYRITE[/easyazon-link] is a perfect example to illustrate my point.  Here we have a naturally occurring event that happens inside the Earth without the assistance of any human technological interference and yet look how artificial and man-made it appears.

My first reaction to the iron pyrite cube was disbelief. How could nature produce something so indistinguishable from modern technology? Then I stumbled across Oxford philosopher Nick Bostrom and his paper on  the  Simulation Argument.  His paper argues that:

“At least one of the following propositions is true: (1) the human species is very likely to go extinct before reaching a “posthuman” stage; (2) any posthuman civilization is extremely unlikely to run a significant number of simulations of their evolutionary history (or variations thereof); (3) we are almost certainly living in a computer simulation. It follows that the belief that there is a significant chance that we will one day become posthumans who run ancestor-simulations is false, unless we are currently living in a simulation.”

Could we have evolved from some deep universal technology! Look at any growth pattern of a tree  (Fibonacci sequence), seashell, or [easyazon-link asin=”3791333275″ locale=”us”]RADIOLARIAN[/easyazon-link] and you can’t help but see the instinctual and indigenous technology at work at the base of our universe. These numerical growth patterns are predictable and repeatable. Is this indigenous technology merely riding our DNA? Could all of the complex numeric biological systems be proof of the simulated universe theory?

Bostrom’s paper  ignited quite a deep curiosity within me. This is where the iron pyrite cube comes in. We assume that we  created computers, spaceships and and robots. However, looking at the iron pyrite cube,  you  can easily see the beginnings of technology springing forth directly from the Earth and Earth was manifested from the universe. It is a complex algorithm to huge for us to comprehend. Given another billion years would with this iron pyrite “evolve”  into an intelligent machine on its own?  I keep getting visions of  the  [easyazon-link asin=”B004FEP0YI” locale=”us”]TRANSFORMERS[/easyazon-link] home planet , CYBERTRON.  With an estimated number of exoplanets somewhere between 35 trillion  and 6 sextillion you can see that somewhere in the universe it is possible that Cybertron could exist.

“Technology is a natural byproduct of human consciousness directly inherited from Earth and the universe. It is numeric, and organic. We can trace the origin of technology back through biological history, all the way to stardust. It cannot be stopped any more than we could stop the planets from spinning or galaxies from forming and decaying.” -Gray Scott

The  Simulated Universe Theory pulls at the very fabric of our sanity, our human identity, and our basic reasoning for life in general.

How would we behave if we knew for certain that our current reality is a [easyazon-link asin=”B004I6D7PC” locale=”us”]SIMULATION[/easyazon-link]? Would we have mass hysteria? When people give up their lives, dropout a society and join the newest trendy simulation cult? Humanity has already experienced several paradigm shifts throughout our history. For example, people didn’t start jumping off bridges just because scientists discovered other planets outside our solar system and yet that bit of proof is counter intuitive in monotheistic religious circles.

This shift in perception has caused a wave of global consciousness change. Religious leaders are now being forced to tell their flock that in fact creationism is not accurate ( see Pat Robertson) and that Earth is in fact NOT 6000 years old.  Sorry kids, Jesus did not ride a dinosaur. Of course no matter what proof is presented, humanity will always have  outliers, science deniers and Rick Santorum.  There will always be people that are more satisfied with an outdated mythology that they can pass on to their offspring and create communities where these mythologies, however false, can create fractured tribes of “low scientific information societies.”

Most people would rather not believe that everything they do is a simulation generated by some enormous future post human computer, or even more disturbing, that the universe is and always has been a “computer.”

The real question that we must deal with when talking about the[easyazon-link asin=”1424336260″ locale=”us”]SIMULATED UNIVERSE THEORY[/easyazon-link] is  “do we already have proof?” Or… are we just creating a new myth based in science?

Architectural Visions: Designing the Future in the Past & PresentSad Songs: The Science Behind Emotion in Music