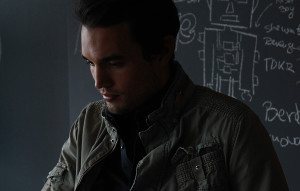 For the past few days, we have been showcasing the ingenious work of Ayoub Qanir, an up and coming filmmaker who is currently working on the brilliant, mind-bending Koyakatsi. Serious Wonder had the privilege of sitting down with Qanir for a Q&A, and we were pleasantly surprised by the level of depth and passion that he shrouds his pieces with.

1. All of your concepts are thought-provoking and riddled with metaphor. When and how did you decide to become a filmmaker?

It all started while growing up in Casablanca, Morocco. Constantly stimulated by the magic of cinema and its unlimited potential, epic adventures always caught my utmost attention and curiosity. As a kid, I was always fascinated by the power and impact that films like Indiana Jones, Back to the Future and Star Wars had on me. I uncovered such an epiphanic world filled with passion, mystery and pull. Simultaneously, I begun exploring the worlds of iconic French auteurs Jean Luc Godard and Jean Pierre Melville which blended a stylized sense and subtleties into their chef d’oeuvres.

Then one day, in my teens, my parents’ [easyazon-link asin=”B006K551HQ” locale=”us”]Sony Handycam[/easyazon-link] started to seem intensely more attractive. That was when I began to shoot films in my backyard with my school friends through the weekends – mimicking the emotions of the thrill and adrenaline-packed action films. [I was] constantly drawn to the hero who has to go through unique, never-before-seen, obstacles – taking him out of his element to overcome new challenges and bring his world into full circle towards the end of his arc.

Interestingly enough, today I am still drawn to the same defiant protagonist, who is unaccepting of his conditions, pushing him through stranger and more peculiar worlds where the threats are far greater and where the payoff is much more rewarding.

2. From what we have seen of ‘Koyakatsi’, it is visually stunning. How did you begin to conceptualize this film and what inspired it?

Let me start by extending an immense ‘thank you’ to the Serious Wonder team for the support and positive feedback.

When I first begun developing the narrative of Koyakatsi, I wanted to conceive of a world I had never seen before – pushing the boundaries of the believable yet grounding the conceptual in Human exploits of science and technology. This would allow me to invent a story that was believable yet grand.

I understood that the creative process had to be a collaborative hall and for that I formed an extensively open format for the entire team to be involved in orchestrating the look and feel of the world. One of my first steps was to bring in an artist that had never done what I was looking for before, then push him through his artistic limits. This was none other than the fascinating Swedish native Kilian Eng. Together we conceived of the scenes of Koyakatsi.

Then, I hired a very progressive animation studio from Norway called Toxic who helped me with the title design which then unexpectedly ended up infecting the rest of the sets and scene designs.

The look of the world at the starting point is similar yet so different from the final pieces. The format had to be open, yet constant curation and polish were necessary throughout. I am very happy with the final canvases and I feel we fulfilled our task in delivering something focused and unique.

3. With virtual reality spreading further through the web, what do you foresee in the future of filmmaking and your chosen profession?

I intensely believe in the consistent power of storytelling staying for as long as we are. I see cinema storytelling as today’s most impactful and enveloping form of dream and reach into the achievable as a species, yet constantly evolving. We thrive for more, unaccepting of our conditions and limitations, pursuing goals beyond our reach and inspiring today’s youth to grab for more and for the next to continue fueling the Human drive and ambition into making this world always in a better vision.

And because of today’s decentralized and democratized voicing and information flow, we each have the power and essential responsibility to carry this world forward. Having said that, I see a medium where education, video-gaming and film-making are merging more so than ever before. I feel storytelling will evolve where narrative will be ignited in short web video, transcend into a [easyazon-link asin=”B0080UVHJU” locale=”us”]video game[/easyazon-link] that we can all control and direct then land into a film format that we can all appreciate and immerse ourselves into. I see a future where the parameters of the narrative are pushed and expanded where we can all be protagonists and players in the stories we choose to tell and be part of.

Virtual or augmented reality is none other than saying we all want to become a more crucial element in the story. We will create worlds that anyone can conceive of, fill them with our dreams and visions and invite others to be part of and believe in. All for the one and same purpose of elevating and pushing forward the Human agenda.

4. What does this film project ultimately represent for you?

It all begun with a theoretical research on the breaking point into artificial intelligence, spilling into a script which then pushed the notion of inventing a new fantasy world of tangible digital life– An attempt at depicting a threat that emerged through the Human initiative; Posing the question of how should we push the [easyazon-link asin=”0307957136″ locale=”us”]digital[/easyazon-link] boundaries slowly and gradually to allow for the world to evolve cautiously.

We are truly humbled and grateful to have been part of this initiative. Putting this idea forward has been a true blessing and we are hoping for the world and ideologies of Koyakatsi to unfold further, giving us the possibility to make aware a greater audience.

Thank you, truly, to the Serious Wonder team.

Future Implications: The staff at Serious Wonder were honored to be a part of the launching of Koyakatsi , and have the ability to work with Ayoub Qanir. We look forward to watching his future unfold, and see what masterpieces his mind will unfurl.

Survive the Apocalypse by Sitting Inside a Tesla
May 3, 2016