Surviving Sandy: Flooding And The Future Of NYC

As many of you know, the Serious Wonder office is located in the heart of the disaster zone on the west side of Manhattan, and like many in our area we were not spared the wrath of Sandy. We were well aware that the zone our office is in (Zone A) was an area projected to get some of the worst flooding in the city along with lower Manhattan, East Village etc.

The first warning that a flood was heading our way was a car alarm. Faint and singular, it sounded far away. Then another and another,  growing closer and closer. The rising water was setting off all the car alarms as it moved down the street towards us. I knew our worst fears were manifesting. I rushed to our balcony and watched in horror as water and debris came rushing down the street and I yelled out “ok it’s starting, grab the flashlight.” I knew it would only be moments before we lost power. It was truly an eerie sight to see from our 5th floor window. We were safe from danger and also helpless to stop the water as it rushed into 10th ave and into our lobby. I watched as storefronts flooded and I could hear the frightening crashing and ripping sound of metal as a massive sign across the street came off and crashed against a nearby building. Luckily, our lobby and our basement only had a few inches of water in them, and everyone who had stayed in the building rushed to pull up carpets and furniture in the lobby. It was amazing to see our neighbors move into swift action, grabbing sandbags and lifting furniture to the second floor without a second thought for personal safety. I stepped outside the front door and watched a man jump into his car just in time to drive off and save it from certain destruction as the flood water kept rising.


The power was out in all of lower Manhattan and the only visible light in the street came from the red flashing lights of first responders in their vehicles that lined 10th ave. I never felt panicked, nor did I feel like I was in personal danger. I did however feel angry that this was the second time in two years that we had been asked to evacuate Manhattan. I was sure that after hurricane Irene our city would be better prepared for flooding. Did they add walls or some sort or new levee? It appears they did not. No one seamed to have taken the climate science seriously and the forecasters like Malcolm Bowman, oceanography professor from Stony Brook University in Long Island, had warned that NYC would be extremely vulnerable to flooding as sea levels began to rise. This issue is not going away and NYC will need to take action to deal with areas that are only five feet above sea level!

The video below shows an animated vision of NYC as sea levels rise and points out just how serious climate change really is.

The most frightening part of this entire issue is that we have a presidential candidate who mocks climate change and has made  statements that undermine the science and the proof that so many experts have now agreed is real. We can not afford to have “leaders” that increase the level of ignorance in the U.S. We need a serious future plan for an issue that may cause disasters such as Katrina, Irene and Sandy to become common.

Do we really want to live in a world of mega-hurricanes and desertification? We all know the reasons for their ignorance  We all know the corporate interests and we all know the spin. What I want to know is…what do these guys think their children and grandchildren will do as sea levels continue to rise? Will they just build ivory towers on the backs of the “middle class” and hope that no one will notice?

There are several ideas that could prove beneficial in securing the future of NYC.  The first concept is an architectural skin that includes a waterproof membrane by Tingwei Xu and Xie Zhang,both from the University of Pennsylvania, that could act as a layered skin to protect the city from recurring flooding. 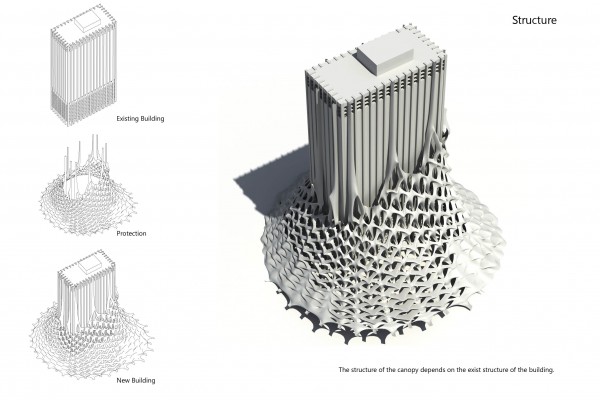 Another solution that may need to be included is adding sea gates, as proposed by the dutch firm Arcadis .

What other solutions should we begin to look into or implement to solve the inevitable rise of sea levels in major cities as well as coastal areas?