RssInstagramTumblrPinterestYouTubeGoogle+TwitterFacebook
What is reality? Is it the material world of which we’ve presided for over 200,000 years or is it the digital world that was birthed into existence just a few short decades ago? Whatever answer you might acquire today, the real answer is increasingly becoming ‘both’ with the help of advanced technologies, e.g. Augmented Reality (AR). What does this mean for our youth? For Disney’s research team, they see a momentous opportunity! 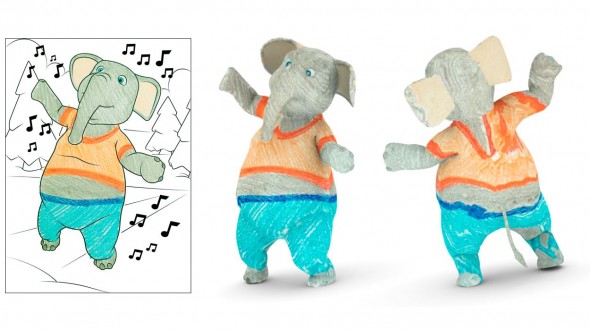 “[C]hildren spend an increasing amount of time passively consuming content or absorbed in digital devices and become less engaged with real-world activities that challenge their creativity. Augmented reality (AR) holds unique potential to impact this situation by providing a bridge between real-world activities and digital enhancements. AR allows us to use the full power and popularity of digital devices in order to direct renewed emphasis on traditional activities like coloring.” 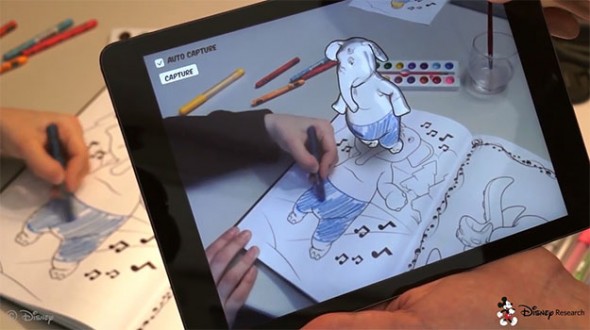 The mind of a child is already the closest thing we have to being considered “magical,” which Disney fears their creative spark is being gradually repressed by the proliferation of advanced technologies. To address this problem, Disney believes that technologies such as AR could help re-ignite their innate drive at being creative by integrating the technology with coloring books. As a child begins coloring the characters, the character itself comes to life before your very eyes – that is, with the help of an AR app on any given device.

By providing a bridge between real-world activities and digital enhancements, Disney hopes the mind of child could equally be enhanced in tandem. To achieve this, the coloring book app detects and tracks the child’s drawing using a deformable surface tracking method, which relies on an outlier rejection algorithm for real-time tracking and surface deformation recovery. As a result, the augmented video stream projects an animated 3D version of the character being colored in. Essentially, as the child draws and colors, the Disney character then springs to life in real-time like magic.

One could argue that we already live inside a present day sci-fi future. A lot of what was once envisioned from the minds of historical sci-fi authors have already emerged for people to bear witness to and enjoy. So what does our future actually entail for us if we’re already living in a sci-fi reality? Will it just become increasingly sci-fi beyond fathomable recognition? That’s certainly a possibility, but then I believe our future won’t just contain elements of sci-fi literature, but equally a future of fantasy.

Can you imagine it: a future where, using advanced technologies such as AR, fantastical creatures emerge within the very same fabric of our physical and material space? When you look up towards the sky, you not only see a flock of birds flying by, but subsequently a fire-breathing dragon alongside them; Where tiny fairies hover above a sleeping child, singing them a lullaby. This is the future we’ll soon bear witness to – a future, not of sci-fi, but of fantasy!