Augmented, Virtual Reality: Quite the Combination 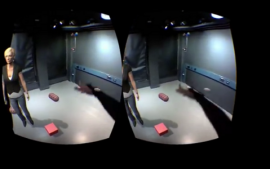 [easyazon-image align=”left” asin=”B00EP0SIOG” locale=”us” height=”94″ src=”http://ecx.images-amazon.com/images/I/41Qrq-OUN7L._SL110_.jpg” width=”110″]Virtual reality is an immitation of the real world in a digital context. Augmented reality supplements a real-world experience with layers of digital interaction. In a combined experience, British researcher William Steptoe created a dual, virtual and augmented reality system to create what seems like a new reality altogether.

Called the AR-Rift, Steptoe’s creation uses the Oculus Rift with additional components to create a series of tiered reality experiences. With webcams, 3D-printed components, and a motion tracking suit, Steptoe is able to layer an augmented visual world on the real and an additional virtual perspective on the augmented version. Interacting within the virtual landscape, Steptoe can then add augmented reality components to the virtual world. In effect, the AR-Rift creates a massive web of augmented-virtual and virtually-augmented visual experiences.

The primary augmented component to the AR-Rift setup is a 3D panel that Steptoe calls the manipulator. This acts as a visible control panel consisting of applications that control your augmented environment. With the manipulator, you can create 3D objects in your augmented space, add an avatar to have a virtual person to interact with, and you can also load a virtual reality scene.

Before entering a virtual scene, using the AR-Rift is like wearing a larger pair of glasses. You can still see your limbs and observe the room you’re in. Here, you can add a few augmented reality experiences like a 3D cube that will move when you pick it up. Once you enter a virtual scene, you continue to control the augmented environment but with the context of the virtual world. The AR-Rift still accounts for your action in real-time, but this is all transposed into the virtual realm.

Virtual reality made it possible to feel like we were in video games. Augmented reality simulated our world with layers of digital video as supplements. With something like the AR-Rift, augmented, virtual, and real world experiences can be woven together in exciting tapestries of new worlds.