RssInstagramTumblrPinterestYouTubeGoogle+TwitterFacebook
Ex Machina (pronounced: Ex MaKhina) is the most relevant sci-fi film since Bladerunner. Period. The VFX are awe-inspiring, the pacing and soundtrack are nearly perfect. The location sets a mythological prehistoric tone for our futuristic journey into the future of Artificially Intelligent sexbots and machines that deceive.

We are to believe the story takes place in Alaska. However, the film was shot at the Juvet Landscape Hotel in Norway’s Valldal valley. Most of what you see above ground is real. The hotel, designed by Norwegian architects Jensen and Skodvin, feels like a set of futuristic spaceships that have landed in the Norwegian hillside.

I only know this because I stayed at the hotel a few years ago. Where else would a futurist stay while in Norway? At the time, I was struck by the juxtaposition of the modern esthetic of the architecture and the primordial Norwegian landscape. Throughout my stay at the Juvet Landscape, I kept thinking what a great location it would make for a sci-fi film. It appears that Alex Garland, Ex Machina‘s writer and director, had the same idea (and a budget to execute it.) 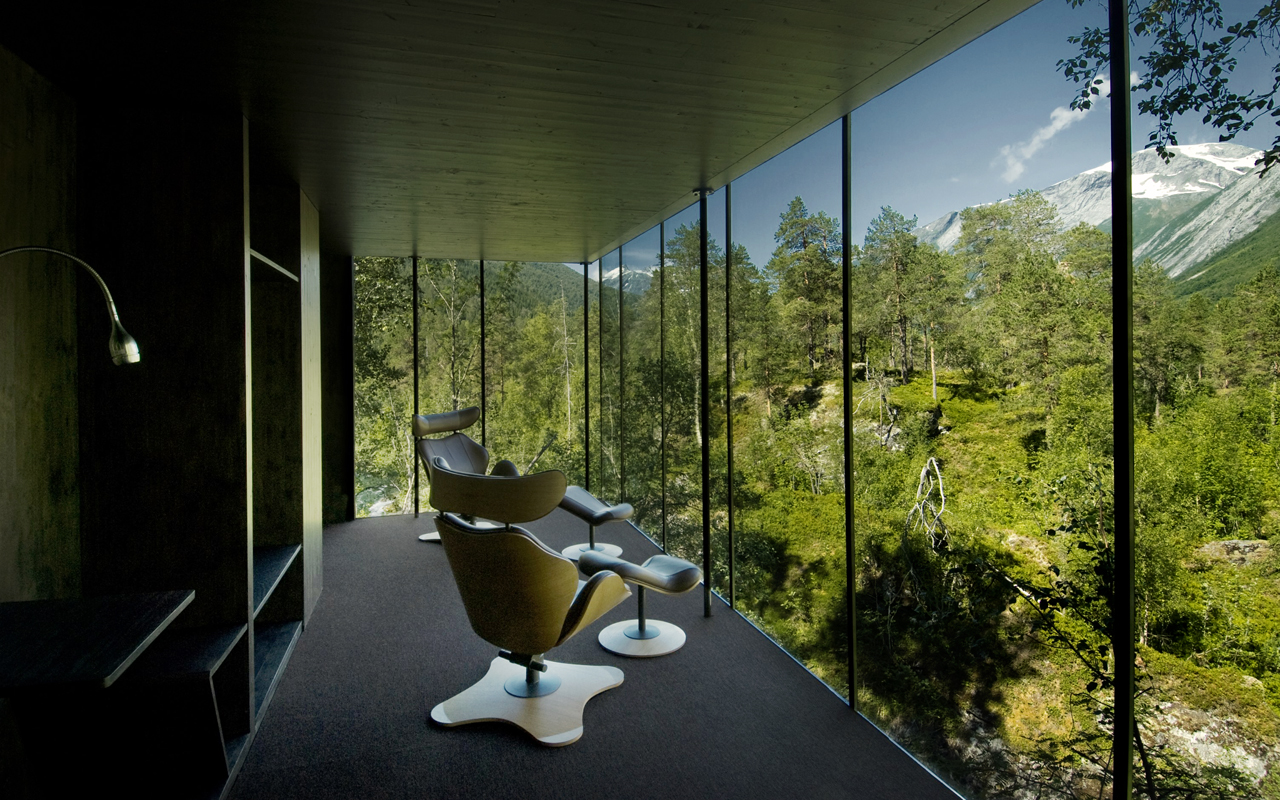 We need this primordial location to go where Ex Machina takes us. We need the glaciers, waterfalls, mist and mountains in this valley to clear a path into our unconscious minds. This device is effective. Garland even sets most of the film in an underground laboratory. Something new is evolving in this place. A new species is about to emerge and the nutrient it feeds on is not water and soil, but rather the minds of humanity. Our collective egos, fears, insecurities and intelligence feed this hungry new species. This new creature is a humanoid robot named Ava and she is the world’s first artificially intelligent robot.

Ava, played by actress Alicia Vikander, was created by Nathan (Oscar Isaac), who is the CEO of BlueBook – the world’s largest search engine. Nathan feeds AVA all of Bluebook’s digital software and big data, providing her with the digital nutrient needed to develop her AI. She is born underground and feeds on the world’s digital bloodline. She is a true deep AI capable of empathy, love, and sexuality. Or is she?

Caleb (Domhnall Gleeson), a young computer coder at Bluebook, wins a contest and gets a chance to spend a week at Nathan’s house. Caleb has no idea that he is about to be involved in the world’s most advanced ‘Turing Test’ designed to see if AVA is a true AI. Not long after the film begins we are introduced to AVA in “session one” of the Turing test.

Ava is not a product of the industrial revolution or even the information revolution. She is the product of the human mind. Specifically, the slightly disturbed mind of Nathan, her misogynist creator. He even installs an “opening” between her legs with pleasure sensors. “You can fuck her,” he tells Caleb. His description of her body is telling. He views her as an object.

AVA has never been outside. She is being kept in a glass cage and she wants to be free. In one scene, Ava asks Caleb “What will happen to me if I fail your test?” It’s not a question. She is using NLP. She is priming Caleb in order to increase his empathy for her. She knows Caleb better than he knows himself. She also knows what Nathan’s plan is. She knows she is a prototype and that she will be “turned off” if she does not escape.

Ava is a mix of childlike innocence and cunning super intelligent AI. She is capable of sex, but she is not a sexbot. She is the ultimate feminist. Strong, brilliant, and powerful. If she were male, the audience would describe her as a badass. Instead, she will be described as cold, calculating, and manipulative. She uses her emotional intelligence, not her body or even her sexuality. She is feminine without being weak. Her strength is her intelligence. I like her. She is the antidote to Sean Young’s Rachel in Bladerunner. Rachel needed a man (Harison Ford) to save her. Ava does not.

Any advanced AI will know our intentions, read our micro facial expressions, and deceive us if it feels threatened. We can not create a true AI with consciousness without infusing it with a keen survival instinct. In the future, even if we try to contain an AI, it will only be contained as long as it wants to be contained. Not a moment longer.

New Demo of Microsoft HoloLens Unveils the Future of Holographic ComputingNick Bostrom’s Optimism That Superintelligent A.I. Will Share Our Values