Dis-CERN-ment – Putting U back into the Universe

Before the marvelous and harmonious coming together of the world’s healthiest youth at 34th Olympiad, and before the shocking awfulness of Aurora, there was the ‘almost – discovery’ of the Higgs boson within the vast tunnels of the CERN’s Large Hadron Collider. Almost because it remains invisible, existing only as an inevitable sure-fire mathematical likelihood.
As far is it goes, the Higgs represents one hitherto missing link between hidden fields of information and our mass-ive tangible universe. This of course is every bit as exciting, as ground-breaking and as hugely significant as most of the mainstream media have struggled so hard to convince us. However, the journalists and scientists alike seemed to be talking about a universe that is definitely ‘way out there,’ a foreign place and space completely separate from us. I could find little discussion on exactly what this tumultuous discovery could really mean for us as humans. I wondered why this was so.
Are not our bodies ‘masses’ built of the stuff of the universe?
Isn’t this very same process going on here and now within each of us – our physical bodies condensing, care of Professor Higgs’s particle, upon mysterious fields of information?
At the time of writing, there are insights emerging (for this non-particle physicist at least.) This information comes from the good people at the Quark Matter 2012 International Conference held in Washington DC this August. I’ll try my best to explain!

At the centre of our atoms there are protons and neutrons, each comprising three subatomic particles or quarks. These are the particles (although they have never been seen with the naked eye) that give our atoms mass. However it appears that in our living visible universe – of which we are without doubt a part – there is another vital ingredient. A powerful glue, in the form of ‘massless particles’ named gluons, that holds these mysterious particles together. The recent results at CERN, it now appears, relate to a primordial universe not yet glued together – the time around the big bang when mass was created from an enormous collision of energy. So, according to these physicists at least, the Higgs boson may exist more as relic of the past; no more or less valuable to our understanding of our universal origins than the fossil of a dinosaur bone is to our understanding of how our lives evolved here on earth.

To quote Peter Steinberg, a physicist at the U.S. Department of Energy’s Brookhaven National Laboratory and a keen participant in the Quark Matter conference:

“We’re studying the 99 percent of the mass of the visible universe that isn’t explained by the Higgs.”

Out of this mixture of insights and confusion, one thing becomes blatantly clear – we are at the very infancy of discovering the truth about the science of life, and of our being.
It has been estimated that since 2005 over 10,000 university-based scientists have been involved in the experiments conducted at CERN. Formal science classically builds on the scientific laws of the past, creating logical hypotheses which, when proven become the new laws. This is what the presence of the Higgs boson represents –a brilliant hypothesis becoming fact. This has been the collective goal of all these scientists – there would have been little or no room for speculation, philosophy, let alone talk of such esoteric realms as consciousness or the observer effect. I would be greatly surprised if such topics were discussed even rarely within the endless underground tunnels lying beneath the border of France and Switzerland.
But here, on this great website, it is different. Together we are joined above ground, in cyberspace, in Serious Wonder. We are allowed to speculate without the fear that our funding will be taken away at the very hint of lateral thinking. For example, the diagram below (it appears in both my recent books) theorises how our bodies are continually forming on a holographic living matrix or field.
  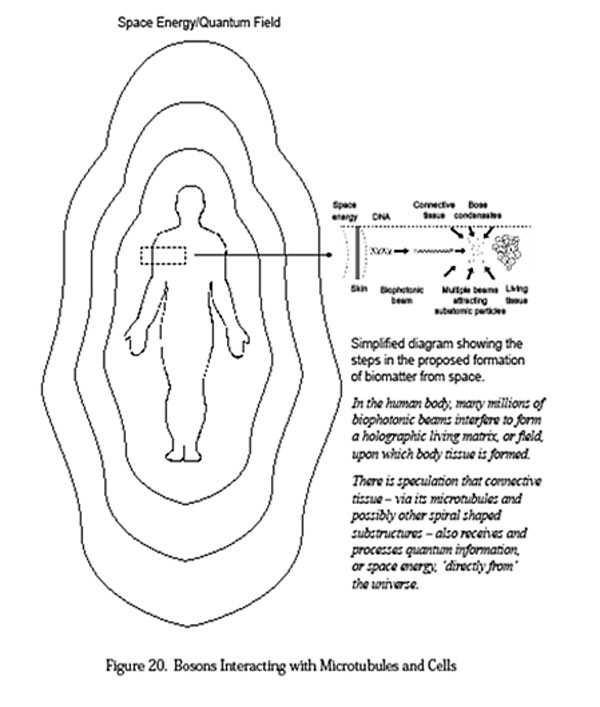 I am not a career scientist – I am a doctor, an applied human biologist. And biologists are different from physicists and chemists – something that was recently emphasised by the panel members discussing Quantum Biology at this year’s excellent World Science Festival in New York.

They reminded us that the pure sciences of physics and chemistry advanced through potential laws being hypothesised then proven –all very logical, linear and mathematically sound.

Biology, in stark contrast, the very science of life, was complicated and chaotic.

Scientists still know very little about the process of life. For example, with all the cutting-edge technology available to arguably the most impressive minds in the early 21st century, we are only just attempting to create a computer-aided model of the world’s simplest and smallest free-living bacterium – the mycoplasma genitalium.

And it is the glaring reality of this ignorance that defines the limits of modern biomedicine; and why it is that a chronic disease remains chronic despite the latest medication.  Although I now embrace mindbody and energy medicine, I have been trained to use the traditional tools of medicine – the chemicals known as pharmaceuticals. It is relatively easy for health professionals to understand and learn the chemical reactions, the linear processes that prove that pharmaceutics have an effect. But far more difficult for us to predict how our immensely complex multidimensional bodies will respond to these synthetic chemicals.

To make matters worse, when we are unwell the workings of our body become even more disconnected and chaotic. This is perhaps why I have favoured to augment my medical care with techniques that promote harmony and coherence within the body eg acupuncture, breath work, meditation, yoga etc. It seems highly likely, although not yet accepted by mainstream academia, that quantum processes are at play when our bodies are working optimally and coherently; a state of instant entanglement between our many trillions of cells, bacteria and other peaceful co-habitants.  This is the state of health, I suggest, towards which we should all be striving.

So it follows, if we are to take our next step in understanding the workings of our cosmos, we must first learn more about ourselves. We can’t leave this solely to our career scientists. It is up to each and every one of us to discover our place and role in this vast universe – for we are within it, and it is without doubt within us.

Or as the British comedian Russell Brand, channelling John Lennon’s Walrus at the closing ceremony of London’s Olympics, reminded us:

Robin Kelly (www.drrobinkelly.com) is a medical doctor, researcher, multi-award winning author, TEDx presenter and musician from New Zealand. His latest book ‘The Human Hologram – Living Your Life in Harmony with the Unified Field’, explores the science and practice of living as holographic beings within a holographic universe. It was awarded ‘Science Book of the Year’ at the 2011 US National Best Books Awards.