Bloom is the Oceanic Farm of the Future

Oceanic farms are the way we will address global warming, solve our upcoming water shortage, and protect our interests in the future. Designed by the Paris-based company Sitbon Architectes, Bloom is a futuristic submersible farm that removes carbon dioxide from the atmosphere by cultivating phytoplankton.

Bloom will also be able to convert salt water into fresh water, monitor rising sea levels, and issue tsunami warnings. The design was selected as one of five finalists for the international Architizer A+ Awards competition in the Architecture +Weather category.

The design of the floating spherical structure encases seven inner chambers that operate as large phytoplankton aquariums. Each have varying water levels inside, enough to allow the entire structure to be semi-submersive like an iceberg. The aquariums will function independently but would be supervised by a permanent staff made up of scientists and marine experts. 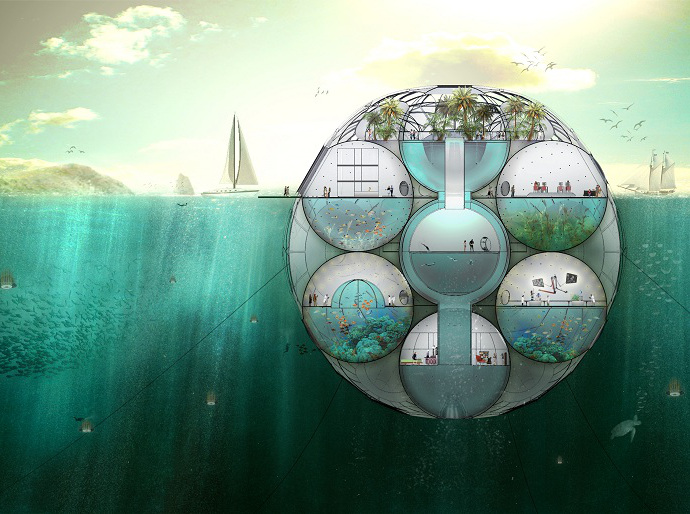 Bloom is attached to the seabed by cables and can sense even the smallest of sea level variations. This way, it would be able to detect tsunamis and issue timely warnings. Primary locations for Bloom aquariums would be in areas most severely impacted by global warming, so as to regulate oxygen amounts, release new oxygen through photosynthesis, and absorb carbon dioxide.

Sitbon Architectes is an architecture collective pair made up by Emmanuel Sitbon and Selma Ferini, both of whom share former intern and assistant experiences and met at the Ecole Speciale d’Architecture ESA of Paris.

[easyazon-image align=”left” asin=”1463757360″ locale=”us” height=”160″ src=”http://ecx.images-amazon.com/images/I/514-b-ilj1L._SL160_.jpg” width=”124″]The design of this spherical farm can be applied to a great deal of other uses. With salt to freshwater filtration, we can imagine these kind of pods to be used for industrial farming and housing complexes at sea.

These could either be separate spheres or integrated farmhouse communities.If we could make these spherical structures independent of seabeds while solving for drift, the ability for us to construct clusters of these Bloom communities would be easier overall.

Living in biodome pods along our seven oceans may be an option for when land becomes too scarce for inhabitants, so long as there are improvements on the cables and infrastructure in order to withstand intense hurricanes and typhoons.

Cory Healy is a freelance writer based in Brooklyn. When he's not writing about tech or music, he can either be found delivering food on bike throughout lower Manhattan, or playing computer games at home.